The headlines of a major Beirut newspaper, this weekend, referenced the recent comments made by Liberty University President Jerry Falwell Jr. He was responding to the ongoing gun control debate in light of the recent mass shooting in San Bernardino, California.

I cringed to see the name of my alma mater in the news on this side of the world.

I’m a Liberty graduate, grateful for the many ways God used my four years there to shape and equip me for the ministry in which I am now serving. It was a campus characterized by intentional discipleship, serious prayer, passionate worship, faithful biblical interpretation, rigorous scholarship, and a heartbeat for the nations. It was there that I seriously considered moving to the Middle East. More than anything else, I was taught by wise brothers and sisters in Christ to value knowing Christ and the privilege of sharing the Gospel of what He has done for us. 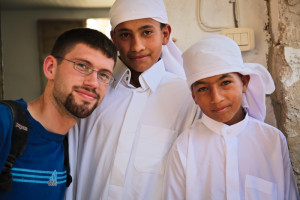 And so I cringed at the headline because we find ourselves in a global cultural context in which that simple, saving message is too-often obscured by a distorted impression of Christianity. That impression is being gained and gathered, piecemeal, by millions of human beings at any given moment. Its development is influenced by sound bites, vague references to doctrine in pop culture and sometimes, tragically, by the painful baggage of cultural encounters that included violence and oppression under the sign of a cross or in the name of a “Christian” nation.

And because of that, the international awareness of comments made at America’s largest Christian university this weekend were harmful, regardless of the context in which they were made or the debate of which they were a part. Cultural observers took note of a tone, or of an attitude and, having taken note, may have moved on with a misrepresentation of Christ and His Gospel confirmed in their minds.

What we have to consider in earnest, as Christ-followers, is the way our positions, our tone, and our devotion to our rights affects the faithful transmission of the Gospel we’re called to carry.

For instance, although self defense and the defense of those we love is a valuable, even honorable thing, is it the thing about which we want to be heard shouting most loudly? In his book Apocalypse Later: How the Gospel of Peace must Triumph the Politics of Prophecy in the Middle East, Abdu Murray says, “I call out to the body of believers in Christ to change what it has been shouting to the non-Christian world, because what it has been shouting, and the manner in which it has been shouting it, has kept non-Christians away from the gospel.” His point is timely.  If we have relatively few opportunities to demonstrate who Christ is before opinions are formed and moments are lost, do we want to be known primarily as those who cherish and rally around our own self-preservation?

To pose the question more succinctly:

What is the cost of a “we’ll teach them a lesson” posture? When we fight to preserve our lives or let it be known that preserving them is our utmost priority, is it possible that there is something more valuable we lose?

Jesus taught us that “whoever would save his life will lose it, but whoever loses his life for my sake and the gospel’s will save it” (Mark 8:35).  I wonder if we realize that we may endanger the souls of others when what we proclaim most passionately is not the One who willingly laid down His life for them, but instead the lengths to which we will proudly go to save our own. 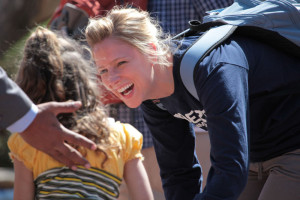 This is not a critique of the idea of self-defense, but a contemplation of whether there are other things we must value more. To a
watching world, what do we want to be known for? What tone do we want to communicate, especially when the tone is heard more loudly than anything else we’ve sought to convey?

If we consider this cultural moment through the lens of our neighbors who may misunderstand or hold an obscure picture of Jesus, then the cost of declaring our utmost commitment to defend ourselves is too great. Among our Muslim neighbors, most of whom would never dream of attacking us, and among our secular neighbors judging the Gospel by how we demonstrate it, too much is lost when the loudest message we send is that we have guns and are willing to use them. Perhaps we would be wise to be more quiet about our rights, more slow to form and voice opinions about those we think might be our enemies, and more faithful to imitate Jesus, who “loved us and gave Himself up for us.”

Ashley al-Saliby is a graduate of The Southern Baptist Theological Seminary (Master of Arts) who served on ministry staff at her home church in Texas for more than six years. She recently married and moved to Beirut, Lebanon, where she is beginning a Masters degree in Middle East and North Africa Studies from the Arab Baptist Theological Seminary. Learning the beautiful Arabic language is a central priority in her life, currently, as she looks forward to increasing relational ministry with women and girls in the region. The love of Christ compels her in the desire to love her neighbors well in a new context.
See all posts by Ashley al-Saliby

One thought on “What is Lost When Self-Defense is Utmost”