According to the United Nations High Commissioner for Refugees (UNHCR), there are 63.91 million “persons of concern”, which includes refugees, people awaiting recognition as refugees, and people who have fled their homes but not sought refuge in another country. Of these, 16.1 million are refugees, that is people who fled to a different country in search of safety.

The largest number of refugees registered with UNHCR hail from Muslim-majority countries: Afghanistan, Syria and Somalia. UNHCR figures do not include Palestinian refugees, who number an additional 4-7 million. The largest numbers of refugees are also living in Muslim-majority countries: Jordan, Turkey and Pakistan, according to a recent report by Amnesty International. While UNHCR does not publicise the religion of most registered refugees, it is widely understood that most are Muslim. 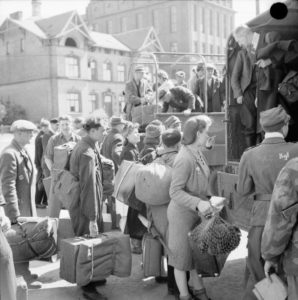 Some of us might feel relief that this is happening somewhere far away to people different from us.

Some of us might feel that this somehow vindicates Christianity as a faith system, demonstrating the brokenness of Islam and the peacefulness of Christianity.

Some of us might be moved to compassion at the plight of refugees and the economic burden of the countries hosting them, and find ways to cross religious and cultural divides in order to somehow offer assistance.

Some of us might work hard to make sure that the relatively small numbers of Christians in these countries are not forgotten.

While each of these reactions has a rationale and are worth discussing, I want to reflect on a different response: This can happen to any of us and, in fact has happened to any of us.

According to some estimates, more than 60 million people were displaced by the events of World War II. When most estimates put the world population in 1950 at 2.5 billion, or less than one-third today’s world population, the scale of the post-World War 2 refugee crisis dwarfs the current crisis.

At the same time, when the Nazis were defeated, approximately 11.5 million Germans were expelled from Eastern European countries: 2.2 million were expelled from Czechoslovakia alone. While many of these exiles were sent to Germany, a country where they may have had roots but where they were not at home, others found themselves in limbo or in labour camps in the Soviet Union. Large numbers of other refugees migrating around Europe in search of a home included Jews, Poles, Ukranians, and Belorussians.

It was this tragic situation which led to the establishment of the United Nations Declaration of Human Rights in 1948 and the enshrinement of International Humanitarian Law in the early 1950s. Most notably, the Refugee Convention of 1951 established a framework for legal protection for refugees to be followed on a global level; this framework includes the protection from forcible return from the country in which they are seeking refuge. The UNHCR’s mandate today includes seeking to ensure this convention is honoured. Many of the world’s largest and most active NGOs were founded in the 1950s to address this crisis.

This history reminds me that this can happen to anyone. This is not a problem “over there” happening to “those people”. This is a problem that can face all of humanity, and indeed, the Bible is full of imagery around migration and wandering. Abraham’s story began when he left his home to go to an unknown land; Moses led the people wandering through the desert for 40 years, Jesus had no fixed abode, Paul was an itinerant. I Peter 2:11 addresses us as “foreigners and exiles”.

Indeed, the refugee experience has shaped European history for the past 70 years, and Western Christianity has been influenced by the narratives of World War II. The writings of theologians such as Dietrich Bonhoeffer and C. S. Lewis were shaped and, arguably, given their depth by the tragic events of the 1940s.

This history also encourages me, to know that we have survived. And that, in the process of survival, lessons have been learnt. Albeit flawed, a humanitarian system is in place to help meet the needs of refugees and to protect them in a situation of deep vulnerability. We can help refugees better today because of what we have experienced.

As a Christian, I am grateful for the safety, security and physical well-being I enjoy today, but weep with those whose countries are currently overwhelmed by crisis, for their story is in some ways my story.

This post first appeared as “Migrant Crisis in Muslim and Christian Countries” on the IMES blog on March 23, 2017.

See all posts by Kathryn Kraft