A mind-stirring follow-on to the best-selling Seeking Allah Finding Jesus, Nabeel Qureshi continues his story of conversion from Islam to Christianity with an in depth look at the ‘mind’ of his conversion; the intellectual roadblocks he faced and the evidence he found for each faith. He expounds deeply on truths that grasped him during the search in his new book No God but One: Allah or Jesus? A Former Muslim Investigates the Evidence for Islam & Christianity. I wish I had this book years ago during my MA studies on the Middle East.

On par in my mind with Josh McDowell’s Evidence Demands a Verdict, Qureshi addresses the most common objections that Muslims have with Christianity: The divinity of Jesus, the crucifixion, the reliability of the Bible, the trinity and the resurrection.  Examined and cross examined, the reader is presented with the evidence on both sides. If you’re looking for another version of ‘can’t we all just get along,’ ‘all religions are the same’ rhetoric, don’t read this book. This paper and ink will make you weep or seethe. 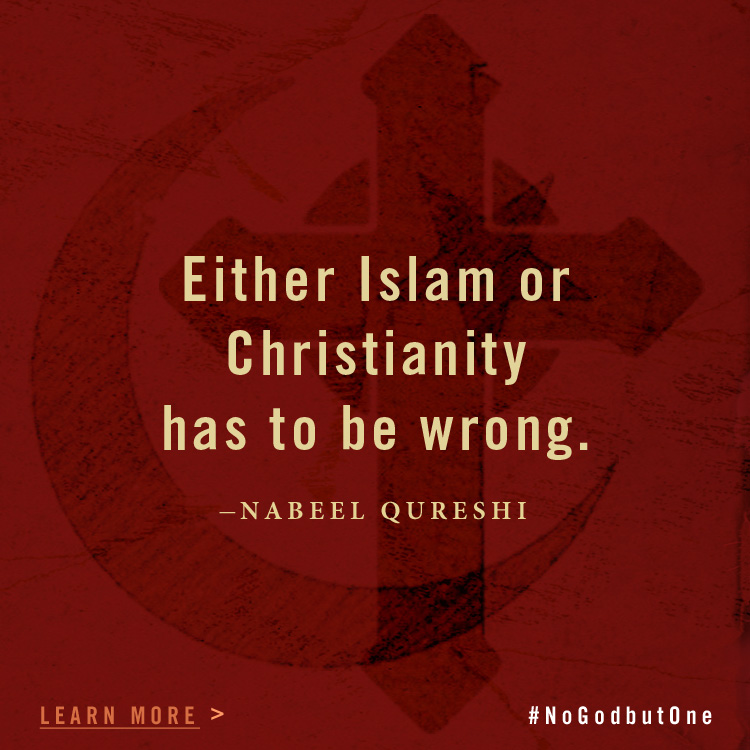 Qureshi takes controversial points of contention head on such as ISIS, sexual slavery in Islam, and even the reliability of the Quran and Mohammad’s prophethood. Regarding Jihad and the Crusades, he says:

It was not just that history did not support the traditional narratives of Islam, but rather that history proved to be entirely incompatible with Islamic origins.

This is the dilemma I had as a Muslim: Either I could trust the historical sources of Muhammad’s life and find a man I would never want to follow as a prophet, or I could question the sources and have no reason to consider him a prophet. Either way I could not conclude, based on the evidence, that Muhammad was a prophet of God.”

Numerous conclusions such as these will surely elicit fatwas from and Shia Mullas and Sunni Salafists alike, but as he stated to me recently: “it wouldn’t be the first time.” He’s received numerous death threats, in the last 11 years, some from close former friends.

If anyone has earned the right to speak frankly, critically, poignantly in this age of Kumbaya political-correctness, it’s Nabeel. Born to Ahmadi Muslim parents in the US, his father served in the US military, Nabeel memorized the Qur’an as a young child, and the family practiced the five pillars, dotting all the ‘i’s. In his exhaustive study of Islamic and Christian doctrine with friend David Wood in college, and subsequent numerous advanced degrees, Nabeel has perhaps more than any other earned the credibility to rip off the diplomatic band-aid. 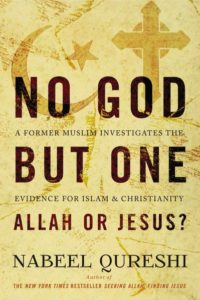 My only criticism of this well footnoted academic and reference-level work is that in an era of Muslim-Christian tension, xenophobia and global anti-Muslim sentiment, I fear Christians may see the evidence presented in Qureshi’s work as ammo to launch offensive battles, instead of engage in compassionate relationship. I also quite frankly, fear backlash against Christians in Muslim majority lands. If a satirical Danish cartoon set off regional protests, what could statements such as these do?

Though research and academic study is critical, most Muslims will not put their faith in Jesus because of a well presented logical argument. Research shows that most choose to follow Jesus because of the compelling nature of the love of Christ and the warmth of Christian community (link). Though not intended to be a “how-to-love Muslims” handbook, some of the historical and theological evidence presented about Islam in this work are quite scandalous.Will it discourage Christians from proactive relationships? Though we should never shy away from truth, the reader should be encouraged at every turn to reach for tact within the context of loving relationship.

Nabeel was diagnosed with late stage stomach cancer just as No God but One released in late August (link). He told us physicians misdiagnosed him with indigestion for some time. Ironically summarizing the main difference between Islam and Christianity he states:

If we misdiagnose what ails us, the treatment will not work, and we will continue to suffer. Islam diagnoses the world with ignorance and offers the remedy of sharia, a law to follow. Christianity diagnoses the world with brokenness and offers the remedy of God himself, a relationship with him that leads to heart transformation.”

The rhetoric ensued quickly from Muslim opponents predicting his death from stomach cancer as a curse from Allah. We pray God will heal this apologist and prophet but whatever the future brings, his message resonates through 2000 years of history and will live on:

A company I have financial interest in, Apricot Services, is providing marketing services to the publisher and author. A review copy of this book was provided to me for review consideration.

Scott Gustafson has extensive experience in global ministry and business in the Middle East, having lived or worked in the region for 20 years. He is a PhD candidate at Vrije Universiteit working with the Extreme Beliefs Project. He serves as the Executive Director for a US based ministry and is also the Managing Partner of Purpose Global Strategies, an International Business and non-profit consulting firm. He advises large funding agencies as well as indigenous businesses and ministries in Sudan, Jordan, Iraq, Syria and Lebanon. He teaches as an adjunct faculty member of Cornerstone University. He has an MA in Intercultural Communication from Moody Graduate School, and a BA in Nursing and Biology from Western Michigan University. Scott and his wife have 2 children and they live in Grand Rapids, MI.
See all posts by Scott Gustafson

One thought on “Allah or Jesus? New Book Cuts Through the Murk of Religious Pluralism”